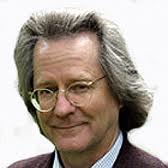 A.C. Grayling, a British philosopher, has written a Secular Bible. It's coming out in the Spring. According to today's Sunday Times it's loosely based on the Old and New Testaments, replacing the familiar bits with modern secular variants. (I'd give the link, but Mr Murdoch wants us to pay for it).

So Grayling's Genesis starts with an apple falling in Newton's garden. His Ten Commandments offers a new set of priorities, eg 'Think for Yourself', 'Do Your Utmost' and 'Love Well'. There's a Book of Songs instead of a Book of Psalms.

Grayling says he's imitated the Bible in weaving together a series of different text, in this case going to the great works of philosophy, history and literature in both west and east. 'There is absolutely not one occurrence of the word God, soul, afterlife or religion,' he says proudly.

I first came across Grayling through a little weekly column he ran in the Guardian years back, a potted discursion on abstract themes (nationalism, death, sorrow, history, etc). I thought they were really good, and always looked forward to them.  His books don't appeal so much - find them rather dry, and there's something rather joyless about his strident atheism.

Is a Secular Bible a good idea? Intuitively I doubt whether much can come from a book born from a negative impulse.

I'm sure many atheists and secularists read inspirational literature without worrying about references to 'God' and 'soul', etc. But this sounds as though it's been put together to spare their delicate sensibilities, for fear that their skins will come out in a rash if they come across religious words.

Still, I could be wrong. It will be interesting to see what he does with it.

Glad to discover you blog via anomalist.com advertising your new book.

I've been keen to point out the new qigong study done by the Mayo Clinic doctors. James Randi attacked qigong master Chunyi Lin before knowing anything about Chunyi Lin. Now the Mayo Clinic has finished a randomized controlled study of "external qi" healing by Chunyi Lin and his master healers at http://springforestqigong.com. The study was peer-reviewed and published this August.

"Subjects with chronic pain who received external qigong experienced reduction in pain intensity following each qigong treatment. This is especially impressive given the long duration of pain (>5 years) in the most of the participants," writes lead author Ann Vincent, MD, MBBS, Mayo Clinic, Rochester, Minnesota.

So obviously the "Koestler Effect" can be over-turned.

I, myself, got banned from the SEED Science blogs by PZ Myers but then I take the "trickster" approach to science a la George P. Hansen's book. I've been banned from unexplained-mysteries.com because I was bringing up the psychosexual aspects of the paranormal -- the need for not just sublimation but also purification using the brain focus of meditation. The key book giving these secrets is "Taoist Yoga: Alchemy and Immortality" translated by Charles Luk. I use a nonwestern music model to explain the paranormal but also to explain why Western science has a deep "rotten root" at its foundation.

What always makes me laugh about this sort of stuff is that some atheists want to keep all the aspects of religion but only on their terms.

They don't want to see Christmas stopped, and not celebrated. They would rather it become a secular holiday:

As in the example above, it's not the concept of a Bible telling people how to live their lives, it's just that they didn't have a hand in writing it.

Many still choose to get married, although many are now secular marriages.

I recall Lord Winston saying how he followed Jewish religious traditions, but more out a sense of structure than of actual belief in the religion. Even Richard Dawkins has stated that he celebrates Christmas

Maybe it's like vegetarians striving to make quorn look like real meat. Haven't they made their choice?