A Medical Medium
Bengston's Energy Healing - Too Good to be True? 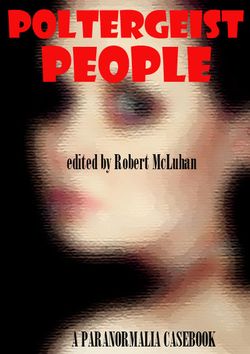 I've had a project in mind for some time now, and it's starting to take shape. It's a response to the objection that there is no evidence for psychic phenomena.

The complaint is largely rhetorical, of course. The implication is that the evidence, being anecdotal, is too weak to merit consideration: in other words it isn't really evidence.

But I believe a lot of people think there is no evidence - literally. And the best reason I can think of for this is that they seldom hear about it directly. Take a subject like poltergeists: it's just not on the general radar, except as something that people 'believe in'; there's little sense of it as a distinct phenomenon.

I believe we'd benefit from listening to people who have experienced it. It might improve the level of the debate.

So my idea is to try to make the primary sources more accessible, taking advantage of the e-book revolution. I've made a start by publishing a collection of poltergeist reports on Amazon Kindle.

These are the original eyewitness accounts, the source of much of what is known about the phenomenon, in the form of letters, diary entries, pamphlets and journal articles. There's Stans, which I covered here recently, and Hydesville, which I discussed a year ago (full list below). These very dramatic cases are striking, but the sober observations of investigators are just as interesting, for instance the so-called Atlantic Monthly case, which is frequently cited in books, and the Worksop poltergeist investigated by Frank Podmore on behalf of the Society for Psychical Research.

Much of this can be found somewhere online, in some form or other (some of it is here under 'resources'). But I suspect there's a limit to the amount of time people want to spend reading material on a computer screen. The material also has to be located and accessed, which can be fiddly. If you can treat it as a book, and download it onto your Kindle for a few pence and in a matter of seconds - and then read it on the bus, or wherever - then it might circulate a bit more.

As I described in Randi's Prize, in the beginning I did struggle to think of these events as hoaxes and natural events. But my imagination wasn't equal to the task, and I had to give up. I've no doubt that sceptics will have better luck, and I shall be curious to see, a) whether they avail themselves of the opportunity to read about these experiences, and b) how they will formulate their responses. I wonder, in particular, how insistent they will continue to be that the witnesses of the mysterious rapping noises at Hydesville were actually hearing two little girls bumping apples on the floor.

I believe that the accumulated effect of reading these narratives is to instil the sense of a quite distinct, psychokinetic phenomenon, one that cannot be blithely dismissed in terms of children's games. That, at least, has been my experience.

These are obviously older cases, and the style and language can take a bit of adjusting to, particularly the eighteenth century ones. On the other hand they happened to human beings just like us, so they're hardly any less relevant. And it's good to read the actual detail of what occurred. I've also provided summaries of more recent twentieth century cases, including Matthew Manning and Columbus, Ohio (Tina Resch) - for the purposes of comparison, to show that all belong essentially to the same category of experience. However I omitted several, such as the investigation of the Enfield poltergeist, as Guy Lyon Playfair has recently republished his excellent book on the subject - This House is Haunted; and the recent South Shields case, which I reviewed here and which has also been written up by the investigators.

I've got another half dozen or so ideas for similar compilations, which I'll try to get round to over the next few months. It's quite time-consuming to photocopy, scan, correct and format, so it may be a while. In the meantime, if anyone else has ideas about what would be good to put out there, or would like to get involved, then please get in touch.

I shall certainly purchase 'Poltergeist People' when I have time to wrestle with the IT involved. Being a little elderly, these things are new to me, and I find IT hard to cope with.
That said, I think Robert McLuhan has a splendid idea, here. To enable people to obtain good, honestly reported (snags and all) information about life's Spooky Bits is a pressing need. This is an age of distrust in all authority, ie, what one does not experience at first hand, and in various capacities I find myself being asked questions about - essentially - Mankind's place in the universe, which would have been classifed as 'General Knowledge' 50 or so years ago. This cultural underrpinning is now missing, especially at a philosophical level. Even science is too often presented to equate with determinist materialism.
I have tried to redress the cultural balance somewhat by writing "God, Ghosts,and Independent Minds" (Penpress; also via Amazon & Kindle). Most who have read it are intrigued by the vastness of life's 'unmentioned' aspects, some of which I have tried ot set out to inform and stimulate opinion. I blogg about it more or less daily on Facebook and Wordpress.
This is why I view McLuhan's type of book and endeavour as important. Please support both. Newton Green.

I think David Fontana's personal experience in Cardiff mentioned in his book "Is There An Afterlife?" were very convincing but copywrite may be a problem. Saw a documentary about this on TV some time ago which was good.

Okay, so I can see right now that Paranormal People ain't no overnight read. The meticulous compilation of poltergeist encounters written up in this book are compelling, but not in a "ghost story" kind of way. The reports in here lack the dramatic feel of a made-up story. There's no "Play Station" effect.

The original writers matter-of-factly detailed stories come alive as something that has happened, and the writer hopes the reader believes him, but at the end of the day, it doesn't matter. Sometimes the writer's seem resigned to the ridicule they will face. Right now, I don't know whether to laugh, cry, or get pissed off. For now, I think I'll opt for getting philosophical.

I think some more recent ones would be better perhaps? Save one, the rest seem to be pre-1970 if I read correctly.

I just purchased it. What a deal! Thanks!

Paul, that would be good, but a compilation of contemporary material by living authors is a different kind of publishing project, and much less straightforward. Certainly worth thinking about, although on this subject I'm not sure how much recent material there is.

A year ago I had a discussion with my son who, being a fan of Dawkins and Hitchens, was reluctant to take seriously any talk of evidence for the paranormal. I asked whether he would take a look if I compiled some references for him. The result was my website which sets out to do just as you describe above: show that there really is evidence.

By the way, I've finally reached Randi's Prize in my list of must-reads and am presently on the early chapters about poltergeist activity, etc. It also reminded me of David Fontana and his Cardiff experiences. Now I'll add Paranormal People to the list.

I beg your pardon ... I meant "Poltergeist People".

Understood. Thanks for replying Robert.