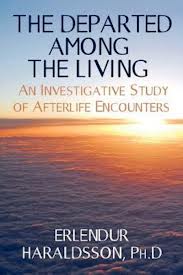 Here’s a book which I think a lot of readers might be interested in, if they don’t already know it. It’s The Departed Among the Living, a collection of apparition reports by Erlendur Haraldsson, a veteran Icelandic psychic researcher.

Haraldsson and a colleague carried out a survey in Iceland in the 1970s, asking ‘Have you ever been aware of the presence of a deceased person?’ In a representative national sample of 902 people, 31 percent answered ‘yes’. During the following years they carried out interviews, getting people to describe the experiences, and asking detailed questions. The anecdotes form the basis of the book – there are perhaps around three hundred, a substantial number – and they are usefully grouped into categories: visual, auditory, smells and scents, sensing a presence, accidents and violent deaths, hauntings, warnings, animals, and so on.

It's the fullest book of such experiences that I’ve seen, at least in recent times, comparable with Gurney, Myers and Podmore's Phantasms of the Living. There is a depth and variety to at least some of the accounts, and also some useful commentary and stats. This being Iceland, a great deal of it has to do with accidents at sea, and the apparitions are often seen on large boats. Considering the country has a population of 300,000 (barely more than the London borough I live in) I’m left thinking that they must be an unusually psychic lot. Then again, perhaps they're just more accepting than the norm about anomalous experiences, and willing to talk about them.

There's an interesting selection on healers and cures, where people sense – and sometimes see – themselves being worked on by people who don't actually exist. This story concerns a crewman who had to take to his bed with back pain.

I must have been sleeping, although I felt quite awake and saw all that happened. There entered my cabin white dressed doctors who said they had been requested to examine me. I told them that no such request had been made. I remember this as I wrote it down immediately afterwards when I realised what had happened. They turned me around and examined my back where the pain was. Then they said: ‘We are going to operate on you’. I had never heard that this problem was operated upon. They said firmly it did not matter at all. I told them I had the shift at 4 o’clock in the night and it was impossible for me to be bedridden for a longer time. They said I would not be bedridden, could work the next day but should be careful and not lift heavy objects. Then I would be fine for a long time. As they said this I saw them and felt their hands on my back but felt no pain. They said the operation was over and they wished me well as I saw them disappear out of the door. I jumped out of bed and opened the door but saw only darkness outside. I shouted, ‘Where are the men?’ Then I heard the man on duty call back, ‘There have been no men here, you must have been dreaming’. I insisted there were two men dressed in white, doctors . . .

I had seen them so clearly as fully awake and always believed I had been awake all through this experience, although I was definitely asleep before. As I jumped out of bed, hardly able to move before, I felt no discomfort anywhere, completely healthy and have had no problem since, although I had had this problem for fifteen years and was often bedridden.

There are also a number that offer guidance or warnings: a voice that tells a factory worker sharply to ‘move away’, which he does, and escapes being crushed by dislodged piece of timber; a voice that tells a man to hurry home, where he discovers his elderly mother in a perilous condition; an apparition that forces a driver to swerve off the road, saving him from an accident; and so on.

Quite a few reports talk of some kind of communication between visitor and percipient:

A friend of mine appeared to me more than once. Five to ten days after he passed away he appeared in my room and I could feel him saying: “You knew it.” And I could feel myself thinking to him: “It’s going to happen to all of us.” I felt he was telling me that I had been right about the afterlife . . .

Reading this sort of account I often wonder how real these apparitions seem at the time. I get the sense that they are mostly seen as real people, as if they were physically there. They behave normally; they are often described as coming and going through doors, moving from one part of the house – or just as often, the vessel – to another. In other cases they might be visible only from the waist up. Sometimes they abruptly disappear, other times they slowly dissolve, as if in a grey mist.

On the other hand many are perceived as a ‘presence’, which is hard to imagine if you haven’t experienced it (for me, anyway). This account by a 30-year old woman talks about it explicitly:

I was not the only person to become aware of this. It was very obviously a deceased man. I saw how he looked, but not like one sees a living person in day-to-day life, but rather as if one somehow feels and accepts that someone is there, without actually seeing them. There were two families in the house and the children were also aware of this. They often talked about the man who was there beside them. We saw him practically every day and we could almost make a joke out of it. It was as if he had become one of the family. He almost always appeared in the same place in the room; just stood there. We made it a custom to avoid that area . . . I knew that his hair was dark and wavy, and that he was a handsome man with broad shoulders, but I cannot describe how I saw him. I thought he could have been about 35, in the prime of life . . .

As in many of the cases in Phantasms, the percipient doesn’t recognise the apparition, but other people later identify it from the description as a deceased acquaintance or relative. Some apparitions are collectively perceived: Haraldsson says there were 89 cases in which the percipient was accompanied by one or more people who should have seen the same thing, and in 41 of these cases they did so. In 29 of these cases a witness was found who could corroborate the account.

It so happened that three couples, including us, were invited to visit a house in Isafjord. When we went in, I saw a woman sitting in a chair in the living room. I must have looked away from her for when I turned to greet her she was gone. It turned out that four of us had seen the woman, and we mentioned this to the couple who lived in the house. They replied that there had been no one in the house except the two of them. When we compared our experiences and found that our accounts of what the woman looked like tallied we realised who she was. She was the grandmother of the woman who lived there, and the sister of one of the two men who had also seen her.

I'd love to quote more examples, but that’s probably as much as I can get away with. If you’re interested in such things, this book is definitely one to get.

In the Sheppton mine disaster 1963, two men were trapped 300 feet under ground for many days before eventually being recued. They both saw the same "figures and visions" of another world at the same time.
Both of them saw the recently deceased Pope john who seemed to be there to comfort them.

A lot of people are very suspicious and sceptical of such matters but the pair were credible witnesses in my view because they were just a pair of hard headed miners. They were interviewed afterwards by psychiatrists (Nathan Comer etc) and their story was published in a journal.

The experiences of one of the miners is remarkable to say the least.