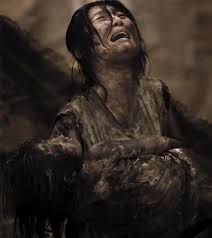 A reader sent me a link to this extraordinary article in the London Review of Books about ghosts of the Japanese tsunami, which seemingly I overlooked when it appeared in February. Stories of this kind were current in the aftermath of the tsunami of 2005, particularly in Thailand. But I can’t recall ever seeing anything so dramatic and detailed as this in relation to a natural disaster.

The stories were recounted to the author, Richard Lloyd Parry, by Buddhist priests who helped survivors come to terms with the trauma.

[The survivors] described sightings of ghostly strangers, friends and neighbours, and dead loved ones. They reported hauntings at home, at work, in offices and public places, on the beaches and in the ruined towns. The experiences ranged from eerie dreams and feelings of vague unease to cases ... of outright possession.

A civil servant in Soma visited a devastated stretch of coast, and saw a solitary woman in a scarlet dress far from the nearest road or house, with no means of transport in sight. When he looked for her again she had disappeared.

A fire station in Tagajo received calls to places where all the houses had been destroyed by the tsunami. The crews went out to the ruins anyway and prayed for the spirits of those who had died – and the ghostly calls ceased.

One man described seeing one evening as night fell,

figures walking past the house: parents and children, a group of young friends, a grandfather and a child. ‘They were covered in mud,’ he said. ‘They were no more than twenty feet away, and they stared at me, but I wasn’t afraid. I just thought, “Why are they in those muddy things? Why don’t they change their clothes? Perhaps their washing machine’s broken.” They were like people I might have known once, or seen before somewhere. The scene was flickering, like a film. But I felt perfectly normal, and I thought that they were just ordinary people.’

I suppose one would call these conventional ghost sightings, the stuff of TV dramas and horror films, easy to think of as the imaginings of traumatised people. Some of the stories do sound like familiar urban myths – like the cab drivers with passengers who asked to be taken to an address that no longer existed, and who then disappeared half way through the journey. But the priests said they also encountered people who appeared to be possessed by spirits of tsunami victims. One woman was taken over by a long succession of confused visitors, all of whom had to have their situation explained to them, and be persuaded to move on.

Psychologists and doctors were able to empathise with the survivors and try to heal them while not taking their accounts literally. That’s fair enough. And I don’t think one could argue that this sort of thing is particularly evidential.

It's sometimes argued that a ghost sighting has nothing to do with the survival of a dead person, a continuing living mind, but is rather the accidental replaying of a section of some cosmic memory. It would be like a film projector that has been left running in a loop, that we might stumble across now and again. That sort of approach might seem to fit with descriptions such as these, where the dead appear obsessively to try to revisit their homes and loved ones, failing and each time starting over, or keep replaying to themselves their panic-stricken attempt to escape.

But if we believe, on the basis of credible research, that survival happens, these accounts offer insights into how the transition can go badly wrong. The dead are trapped in a trauma and unable to escape. It reinforces the idea that a shocking and violent death of this kind could be one of the most difficult experiences a human being has ever to undergo, that it’s not over when it’s over - in the reassuring narrative of the near-death experience, full of light and reassurance - but that the horror must be endured repeatedly until one either finds a way out or gets rescued.

And there are reasons to think this is exactly what might happen if a person passes as a result of violent and chaotic circumstances. Humans easily get stuck in a rut of obsessive mentation at times of great stress - I think almost everyone experiences this to varying degrees. Certainly I’ve had the experience replaying a disturbing event in my mind in every excruciating detail, and then when I’m done, going back and replaying it again. And again. And again. With absolutely no idea why, or what purpose it serves, as if the mere act of repetition might change something, or somehow make the event more bearable.

Over the years I’ve learned to observe this curious phenomenon as it occurs, but I can still find it hard to switch it off. In extreme cases that only happens through the application of serious mental exercises. Why do we insist on torturing ourselves in this way? Or, more exactly, since no one voluntarily does it, what force subjects us to it?

So the implication in these descriptions is that post-traumatic stress is not something that we can rely on death to release us from, but, on the contrary, may be caused by death itself, and is equally requiring of healing in the discarnate state. This is one reason why we need to expand our ideas about post-mortem realities in the light of psychic research. And it underscores the point that research into these matters, and truly getting to the bottom of them, is not some quixotic, marginal activity for bored or superstitious minds, but something fundamental to human enlightenment, that will one day become generally accepted.

It frequently unsettles me when, on the more plausible "ghost hunting" type TV shows, the implication that a given building is occupied by the invisible (yet somehow visible to each other) spirits of multiple individuals involved in some tragedy/crime/overwhelming sadness is glossed over without any contemplation as to what this might mean for any one of us, or our loved ones, in death if such a state of affairs is possible. Are they trapped there forever? Who is attempting to "free" them, if you believe they're really there? And what happens to the trapped who never happen to come across a friendly medium/exorcist no matter how many decades pass? It's all rather Poe -like and morbid.

The world of such alleged spirits is also confounding , if taken at face value...invisible to us, but interacting in some way with each other, aware of their own status to the degree that they try to scare or communicate with curious visitors, yet supposedly trapped by their own lack of acceptance of being dead, and able to touch people and move objects about, but only some objects, usually when you're not looking, and yet can't use whatever energy or power that involves to simply pick up a pen and write a coherent message. And so on.

In relation to the Tsunami apparitions I'm curious to know whether there are - and if not, why not - frequent reports of ghostly presences at such places as Auschwitz. If there are, why do we never hear about them? I did look it up once and it was explained that psychics and mediums don't go testing the place because of hte obvious sensitivities and upset it would cause. But even so given the perhaps millions of annual visitors to these places surely stories would be getting out all the time of phantom inmates and startled tourists? Does anyone know?

Absolutely, Lawrence, I've often had the same thoughts myself.

Sure, you can trawl through the Spiritualist/Spiritist literature about such. But if you decide to have a go then make sure you have your cherry-picking machine well oiled (with plently of spare fuel at the ready) before you do.

I consider that some of these cases of recurrent apparitions are genuine, because they are consistently reported throughout history, by independent witnesses and involving patterns as violent or sudden deaths. So the main question in my opinion is what it appears. The fact that these apparitions do not usually interact with witnesses suggests that they are vestiges of the past, ie, strongly emotional events that are printed in the space-time and can be again perceived by some witnesses. On the other hand, there are cases that suggest interaction, for example, when the apparition speaking with the cab driver, which suggests that these apparitions are minds of the dead who died without being prepared and have been tied to this plane, repeating the actions neurotically they did before dying.

Michael, you should look at the topic "NDEs and Hell" at NHNE Pulse (a very good NDE-related website with a lot of material):

They summarize messages from the distressing NDE there, and the resulting sum is very close to what you wrote about the tormemted ghosts here... Looks like "the lost souls" we encounter here on Earth may be simultaneously in *their own* "Hell" - the twisted spiritual realm created and maintained by their own trauma and repeating cycles of suffering... What's the most important, they are not locked in there; nothing holds them there, beyond their own persistence in repeating their sorrow. As it was said on the NHNE Pulse by NDEr Mellen-Thomas Benedict:

“I had a descent into what you might call hell, and it was very surprising. I did not see Satan or evil. My descent into hell was a descent into each person’s customized human misery, ignorance, and darkness of not-knowing. It seemed like a miserable eternity. But each of the millions of souls around me had a little star of light always available. But no one seemed to pay attention to it. They were so consumed with their own grief, trauma and misery. But, after what seemed an eternity, I started calling out to that light, like a child calling to a parent for help. Then the light opened up and formed a tunnel that came right to me an insulated me from all that fear and pain. That is what hell really is.”

Oops, not "Michael", but Robert, Robert McLuhan! I entered Robert's blog just after reading Michael Prescott's one, and confused their names!

Sorry for this inconvenience!